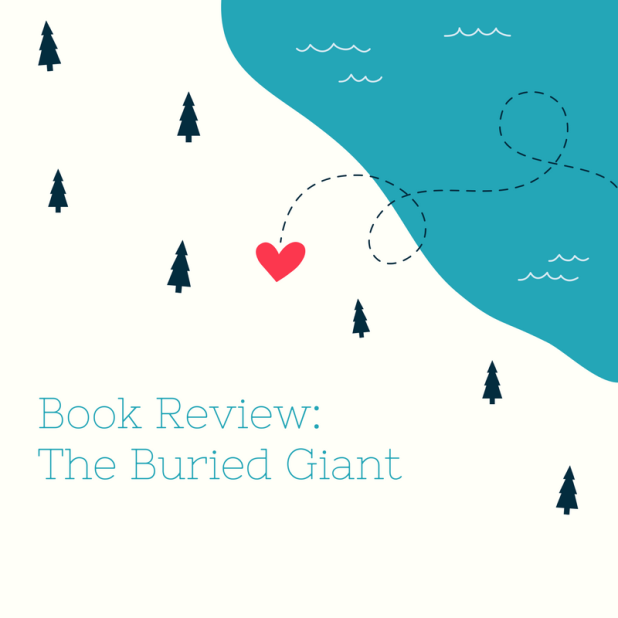 The Buried Giant is a fantastically tender tale. Elderly Britons Axl and Beatrice set out to visit their son in a nearby village. Their journey is quickly diverted off course, and they become the travelling companions of Wistan, a Saxon warrior from the Fens; Edwin, a promising young lad shunned by his village, and Sir Gawain, the last remnant of King Arthur’s court. The plot which unravels represents a unique combination of historical, fantastical and literary fiction, and the narrative proves to be both delightful and immensely endearing.

Although there’s a fair share of action, The Buried Giant is fundamentally a character-driven novel. Axl and Beatrice are highlights among the cast of players, and it was extremely refreshing to see a large part of the story through Axl’s eyes, particularly in a historical/fantasy setting. These genres tend to favour younger and able-bodied heroes, but Axl and Beatrice’s ailments and struggles made their journey feel much more tangible to the reader.

My favourite character by far was Sir Gawain. Ishiguro dedicates two chapters to Gawain’s reveries, which are bumbling, aimless and digressive in the most charming way. I was extremely excited to hear that Ishiguro was somewhat inspired by Sir Gawain and the Green Knight whilst writing this novel, and I think this influence shows most in his depiction of Sir Gawain as a figure travelling through the dangerous English landscape, with ‘no fere bot his fole‘ [no friend but his horse].

As with Axl and Beatrice, much of the innovation of Gawain’s character comes from the fact that he is reaching the end of his life. In fact, this innovation applies to the setting of the book as a whole. Ishiguro expertly navigates the dying influence of Arthur’s court; a unique perspective which has not been thoroughly explored in fiction (historically, writers have preferred to track the rise, and then the fall), and although King Arthur does not feature prominently in the novel and (as far as I can remember) does not have any dialogue, his tracks can be seen everywhere in The Buried Giant.

When researching the book, it quickly became clear that there has been much discussion about the genre of The Buried Giant, and in retrospect I feel that the attention drawn to this topic is unwarranted. The Buried Giant mixes genre no more than any of Ishiguro’s other works. Never Let Me Go, for instance, mixes science fiction, romance and literary fiction. However, it should be said that the inclusion of fantastical elements in The Buried Giant is particularly masterful, and Ishiguro weaves them into his world so effortlessly that they become a believable part of the landscape. Furthermore, the use of these tropes does not sacrifice any of the literary significance of the work, rather it adds to it.

There was one major point of contention which I had with The Buried Giant: the use of multiple points of view. The multiple narrators worked well at times, supporting various plots, sub-plots and character arcs with ease. As ever, Ishiguro’s use of the first person is strikingly effortless, and this is most evident in the chapters dedicated to Gawain’s reveries and the final chapter, which I will not spoil. However, I was somewhat disappointed on the first occasion when the perspective moved away from Axl, and I couldn’t help feeling that I was far more attached to him as a narrator than any of the other points of view which emerged. Out of all of the narrations, Edwin’s was by far the weakest and I found myself rushing through his chapters to reach something more interesting.

Overall, The Buried Giant is a fantastic read, particularly for any individual with an interest in medieval history, literature or language. Ishiguro approaches the setting of post-Roman Britain with sophistication and nuance, and resists trying to fill in too many gaps or make too many assumptions. As an exploration of collective trauma and the quandary of remembering versus forgetting, it is sublime and I would very much recommend it to any interested readers.